To share your memory on the wall of John Baker, sign in using one of the following options:

The gesture that can change the world

He was born August 22, 1941 in Eau Claire, the second son and fourth child of the late LaMoine Henry Baker and Mary Jane (Melville) Baker.

Shortly after John’s birth, Japan attacked Pearl Harbor, and John’s father LaMoine enlisted in the Navy. During the remainder of the War John resided with his maternal grandparents Warren and Elizabeth (Patterson) Melville, in Shaw Town, in their house built by Elizabeth’s father Tobias Patterson (“built with a keg,” said John’s grandmother, though the house is still standing and inhabited today, which speaks to Tobias’s construction capabilities), where there was no running water and where John experienced once-a-week baths during the War with water heated in a copper boiler on the wood stove.

Despite sustaining significant heart damage a couple years after the end of the War as a result of Rheumatic Fever, and despite his doctor telling his parents not to expect him to live long and certainly not to live beyond childhood, John defied the odds, most probably due to his paternal grandparents Floyd Henry Baker and Emma Cassie Mikesell Baker, who hauled him off to Mondovi and kept him in bed for six months in order to prevent any strain on his already inflamed heart, and then later on due to the concern and ministrations of Drs. Mohammad Jaghlet and Sal Obaid (these amazing Syrian immigrants likely extended John’s life by three to four decades, demonstrating the insanity, ignorance, and bigotry of the current travel ban; the family extends their heart-felt gratitude to these doctors, and others, for keeping John alive for almost eight decades).

During the time that John spent half a year of his childhood in bed propped up on pillows in his paternal grandparents’ home in Mondovi trying to avoid further heart damage, various relatives brought him history and civics books, and his treasured Viewmaster, with slides of national parks, and large colonial cities on our great nation’s East coast, which sparked a life-long desire to travel.

John’s Grandma Emma also ensured that although he was kept largely immobile, he nonetheless finished not only his schoolwork, but also his weekly Sunday School lesson, in order to keep up with his classmates.

Once John had recovered from Rheumatic Fever to the point that the family doctor -Dr. Buckley- thought that he was no longer in danger of sustaining further heart damage from normal activity, John was permitted to attend Camp Cheteck in the summers, and later sent his children into fits of laughter, regaling them with stories of Camp Chetek visitor Reverend “Winn” Johnson absurdly railing on about marbles, cards, comic books, and jacks being the sinful work of the devil.

John started working as a gradeschooler delivering newspapers, then moved on to being a stock boy at Kerm’s grocery on Water Street. Although John’s father LaMoine was a religious man, LaMoine favored hard work above all else, and therefore let his children play hooky from church if they had to work. John eagerly offered to work Sunday mornings.

John also was a Boy Scout, Although his work obligations prevented him from attaining the rank of Eagle Scout, nonetheless achieved, and was a lifeguard at Camp Phillips. And not only that-- he was football manager, student counsel, prom king, junior class president, first chair baritone horn player, and pep band director.

On November 9, 1963, he married the love of his life, Wendy Lea Dole, who he met while playing baritone horn in City Band (she played French horn).

However, baritone horn wasn’t all he played. Due to a random roll of the genetic dice, John inherited his father’s ability to play many instruments by ear with perfect pitch within a couple hours of putting his hands on them, and was a whiz on any instrument that passed under the roof of his house. If you asked him to “play thus-and-such,” he could do it, as long as he had heard it at least once or twice before.

At one point during the Vietnam War, John attempted to enlist in the Navy, but after a doctor listened to his heart during his physical during induction in Milwaukee, John was given a medical discharge and sent home.

Despite certain limitations due to his heart injury, John still enjoyed physical challenges including routine cross-river swims on the Chippewa River and city-wide bike rides.

After graduating from what was then known as the Wisconsin State Teachers College, John worked as a social worker for Eau Claire County, before being hired by the state to perform financial auditing. He and Wendy raised their three children in Eau Claire until moving to Altoona in 1986.

Spending time with his family was central to John’s life; when he had to go out of town for work, he would bring his wife and kids with, to La Crosse, Madison, Milwaukee, and elsewhere.

John loved playing and listening to music, from Beethoven to Rossini to Benny Goodman to the Trashmen. He transmitted his love of music to his children while simultaneously teaching them history, home renovation, roofing skills, automotive repair, and a healthy skepticism for authority.

He also found it entertaining to awaken his children Sunday mornings by playing Reveille on the trumpet outside their doors. And as far as the fine arts goes, not only did John transmit his love of music, he transmitted his love of the visual arts, spending many hours teaching his children to draw-- cars, mountains, islands, houses, palm trees, and more.

John had a passion for the wonders of our natural world, and on several occasions took his family to Yellowstone, Yosemite, Glacier, Death Valley, and Sequoia National Parks, to the Badlands, the Rockies, the Sonoran Desert, the Great Salt Lake, the Grand Canyon, and other marvels. John also had a passion for history, and brought his family to Monticello and Washington DC, and to many Civil War battlefields.

After retiring in 1996, John and Wendy got a good deal on a second-hand motor home and traveled the west with their two cats, Pixie and Whiskers. When John’s heart finally failed to the point that travel was no longer an option, he still had access to his precious books, and then the internet, where with a few clicks of a mouse he could visit Mesa Verde or the Teton Range again.

In 1999, John and Wendy moved to the Town of Drammen, where they resided until 2017, when John’s failing health forced them to move back into town. In 2019 he and Wendy sold their home in Eau Claire and moved in with their daughter and family in Madison.

John is survived by his wife Wendy, daughter Andrea and her husband Eric of Madison, daughter Kathleen and her husband Jim of Des Moines, son John of Eau Claire, and his grandchildren Hailee of Eau Claire, Kai, Aiden and Sophie of Des Moines, Hypatia and Elsie of Madison, Nicole of Cristalina, Brazil, and Andrico who presently resides on a commercial fishing boat somewhere in the Bering Sea.

He was predeceased by his brother Robert (“Bob”) of Hallie, and brothers-in-law James Dole, Bob Dole, Bob Ures, Charlie Gore, and Carl Moseley.

In accordance with John’s wishes, he will be cremated and there will be no funeral, although a Celebration of Life will be held March 28, 2020 at the Eagles Club, Chippewa Falls, from 2:00 p.m. to 5:00 p.m.

Memorials may be made to John’s favorite charities, namely the Southern Poverty Law Center and the ACLU, or to the charity of your choice.
Read Less

There are no events scheduled. You can still show your support by sending flowers directly to the family, or planting a memorial tree in memory of John Henry Baker.
Plant a Tree

We encourage you to share your most beloved memories of John here, so that the family and other loved ones can always see it. You can upload cherished photographs, or share your favorite stories, and can even comment on those shared by others.

Posted Feb 27, 2020 at 01:26pm
My sympathy to Wendy and Family! May you feel comfort in memories over time.
God Be With You,
Peggy Klein (former member of First Baptist Church in Eau Claire)
Comment Share
Share via:
CL

Posted Feb 27, 2020 at 09:54am
I imagine John is reading old issues of “Mad” magazine and singing “Be-bop-alula” somewhere alongside our brother Bob, happy and pain-free.
Comment Share
Share via: 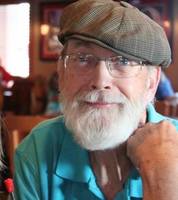